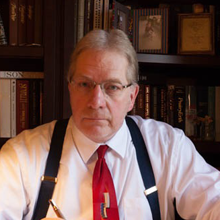 Robert Gevers, a practicing attorney, has spent thirty-three years in the trenches of courtroom justice and the halls of government politics.  The touchstones of his career include two terms as an elected District Attorney in Allen County, Indiana, a stint as an Assistant United States Attorney, service as a Senior District Attorney in a rural jurisdiction, court-appointments as a defense attorney for indigent clients in state and federal courts, the founding of a boutique law firm specializing in criminal defense, and a tenure as Dean for Career Services at a law school.

Gevers honed his speaking and writing skills through countless hours of courtroom practice and political leadership.  His efforts in both arenas are recognized by his peers in an anonymous survey leading to Gevers’ rating by an independent review organization as accomplished at the highest levels of skillful and ethical representation of clients and constituents.

Recently, Gevers wrote about the Parkland, Florida, school shooting and was recognized “(as) a pioneer for social freedom and rightful representation. His opinions, suggestions, and poignant thoughts are not only thought provoking, but tastefully biting in a way that urges the American people to look at more than just the surface of these recent youth massacres”.

A private practitioner with a thriving law firm, Gevers maintains his appointment as a public defender for clients accused of serious and violent crimes who are unable to afford legal representation.  In January 2018, Gevers was selected to represent an indigent client charged with four murders in a death penalty case.  Having served as the prosecutor on capital litigation cases, as a committee member of the American Bar Association’s Assessment on the Death Penalty in Indiana, and now as a defense attorney in a capital case, Gevers is uniquely qualified.  Gevers also serves on the Board of Directors for the Northern District of Indiana Federal Community Defenders, Inc., and is a member of county and state bar associations.

His eye for detail, his knowledge of forensics and trial strategy, his insight into the politics of government administration, and his ability to relate to the diversity of a city, enable Gevers to synthesize facts and circumstances into a compelling presentation.

A graduate of Northwestern University, Evanston, Illinois, and Indiana University School of Law, Bloomington, Indiana, Gevers retains connections across the United States with former classmates working in varied industries.  As a former Dean of Career Services, Gevers maintains contact with former students and faculty members in every region of the country.